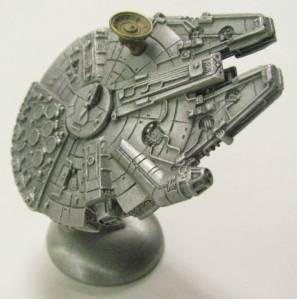 I’ve had my eye on these for quite a while. As well as Franklin mint, Rawcliffe Pewter also released their version of the Millennium Falcon in pewter. It’s about half the size and while i cannot remember how much it cost, it was also pretty expensive for what it was. (I don’t know what it is about pewter, but they sure do like to inflate’s their prices. 😦 ) Anyway, i’ve never seen these in the person before, but it is fair to say that attitude was one of “once again Star Wars fans are being taken for everything they can.”

Again, thanks to ebay, i bought one for a pretty decent price. I’ve got to say that i’m hugely impressed. Although half the size of the Franklin Mint one, it’s very impressively detailed and still a fairly decent representation of my favourite starship. There are two versions, One with a complete pewter finish and one with a gold painted deflector dish. I know that it’s not much of a difference, but as a Millennium Falcon collector, i have to have both versions. (I only found out the other day that the dish moves. That’s something that Franklin Mint were not able to provide.) Anyway, here’s a photo of each one. The wooden plate says that it’s limited to 15, 000. I wonder how niave people must be to think that 15, 000 of these is a limited edition. 🙂 Anyway, i talk too much. Here’s a couple of photos. 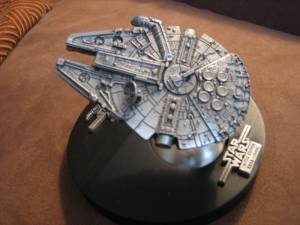 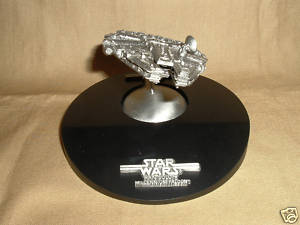 A long time Science Fiction fan and Star Wars collector, my collection focus has taken a turn towards Han Solo's iconic Star Ship and I thought that i'd start this blog to keep track of my collection of Millennium Falcon related stuff as i progress.
View all posts by mffanrodders →
This entry was posted in Pewter. Bookmark the permalink.