Ruggable have released a line of washable Star Wars floor mats. Rangeing in size from 2.5′ by 7′ ($109) all the way up to 8’by 10′ ($399), so there is a size for every collector. There are some nice designs, but there are only two that I would probably pick up.

The first is this “Rebellion” Rug.

A nice, minimalist image of the Falcon escorted by two X-Wing’s and an A-Wing. Simple, but effective.

The second rug that interests me is “Smugglers“. This one comes in either Grey, or R2-D2 Blue. 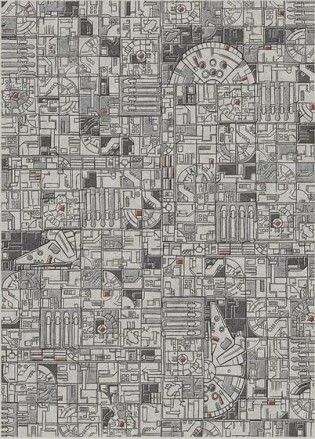 Personally, I’d go with the grey, but the blue is quite striking and I suppose it depends on the decor of your room, too. There are other rugs that also feature the Falcon, such as the Armada and the Ikat but they aren’t as nice, or as focused as the other two.

Thanks to Brian Heath for the spot.

A long time Science Fiction fan and Star Wars collector, my collection focus has taken a turn towards Han Solo's iconic Star Ship and I thought that i'd start this blog to keep track of my collection of Millennium Falcon related stuff as i progress.
View all posts by mffanrodders →
This entry was posted in Homeware, Things that i don't have yet... and tagged Millenium Falcon, Millennium Falcon, Ruggable, Star Wars. Bookmark the permalink.