After what can only be described as “a really long wait”, my precision cast Millennium Falcon from EFX arrived last month. It’s been sat in my front room since and I’ve just taken the opportunity to open it this morning. Firstly, the model came double boxed and weathered the battering that postal service can sometimes give these parcels.

Opening the box, I was nicely surprised with a large black cardboard sheet with a photo of the model. A pleasant reminder of the old days of Master Replicas.

Beneath a polystyrene sheet was the base, inscribed with the Star Wars logo. Unfortunately, mine had a black residue between the aluminium and the acrylic. I’m assuming that I can simply unscrew the four EFX screws, remove the acrylic cover and just clean the mark away. I emailed the EFX customer helpline and am awaiting a response.

I ws delighted to see that EFX chose to make the lighting option battery powered, rather than using a mains socket. A simple choice that removes a lot of hassle for international customers. 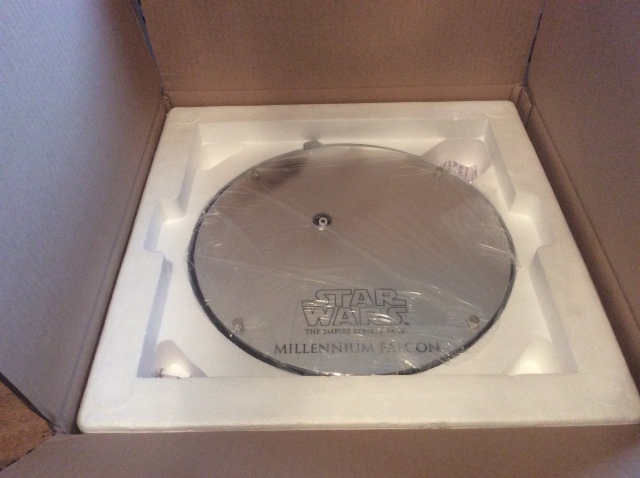 Underneath the base is the certificate of authenticity. Lift out that section of the packaging to expose the model itself.

I wasn’t sure what to expect as I’d read a lot of negativity online. I am pleased to say that I’m delighted with it. There is criticism that the bit between the mandibles don’t fit properly, which my model also had but It’s easily ignored. The detail was pretty good, too. Much better than the Code 3 model that it set out to replace and I noticed that it was a little bigger as well. Another surprise.

The dish is separate and is magnetised. I was disappointed that It’s just made of plastic, but I suppose that’s to stop scratching. I also think the dish looks a bit too small, for some reason. Unlike the Code 3 version, there are no moving parts and even the quad guns are fixed.

I was under the impression that these Precision Cast models were not going to be limited, but the EFX website says that they have sold out. I wonder what the final edition size was? Overall, I paid quite a lot for this. $600 to EFX, $200 for shipping and an additional £102 for Tax back in the UK. Still, I would get it again and I think that this is a great version of the Millennium Falcon.

I also bought this rather nice display case from Widdowson in the UK.

It’s just a little bigger than a detolf, but it can easily go on the top with minimal overhang.

There’s a nice level of attention to detail on this. The base is cut to receive the round EFX base and there is a gap at the back for the lighting switch.

The base comes in either black or white and was £110 plus shipping. Service was excellent and I received mine the following day.)

A keen Star Wars collector since 1977, my collection focus seems to have taken on a turn towards Han Solo's iconic Star Ship. Why the Millennium Falcon? No one else seemed to have one at the time and it was fair to say that i had difficulty resisting the higher end models. My friend, icruise from Rebelscum has a superb blog for his Jabba the Hutt collection, I thought that i'd start this blog to chart my own collection of Millennium Falcon related collectibles as it increases.
View all posts by mffanrodders →
This entry was posted in eFX, High End Collectables and tagged eFX, Millenium Falcon, Millennium Falcon, Star Wars. Bookmark the permalink.