When the Lego UCS Millennium Falcon was originally released, I wasn’t focus collecting. I always meant to buy one, but it sold out and like many collectors, i was just too late. Now that i’m focus collecting, i realise that i’ve made a huge mistake. (I mean, i had one in my hands and put it back. 🙂 ) The second hand market for one of these is ridiculous, and prices range from $3, 000 to $10, 000. With those kind of prices, i do appreciate that i’m never going to own one of these. Sooo…

Lepin is a chinese firm that produces a set that “echoes” the Lego 10179 UCS Millennium Falcon. 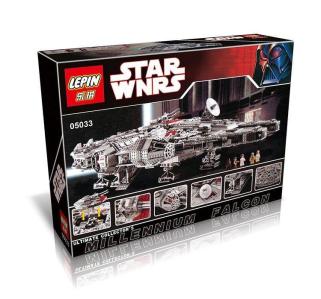 I’ve been looking around to see how the Lepin compares to the original Lego set, and whilst the quality isn’t as high as Lego’s, it’s still rated as quite highly, as shown by this review on Monkey’s Can Game. I thought i’d take the plunge. I bought mine from AliExpress for about $200 with free shipping. I must confess that i do feel a little guilty as i’m essensially condoning a knock off set. 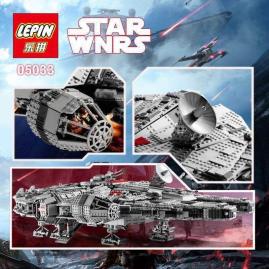 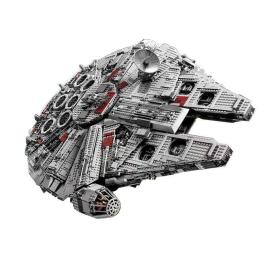 A long time Science Fiction fan and Star Wars collector, my collection focus has taken a turn towards Han Solo's iconic Star Ship and I thought that i'd start this blog to keep track of my collection of Millennium Falcon related stuff as i progress.
View all posts by mffanrodders →
This entry was posted in Lego, Things that i don't have yet..., Toys and Games and tagged Lepin 05033, Millenium Falcon, Millennium Falcon. Bookmark the permalink.