This stunning Millennium Falcon model was displayed at this years Star Wars Celebrations. Based on the five foot model, it’s built by Lee Malone from Rogue Studio Productions, it’s incredibly detailed and has several nice features, including a really detailed cockpit with lighting a swap out rectenna dish of both the Original Trilogy and the Falcon as she’s seen in The Force Awakens.

So good, even John Knoll (ILM model maker) is impressed. 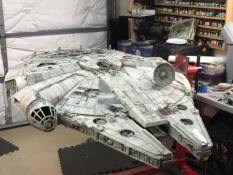 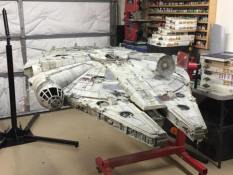 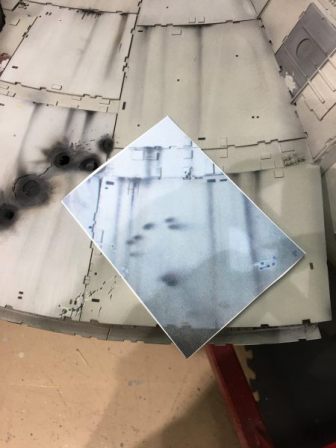 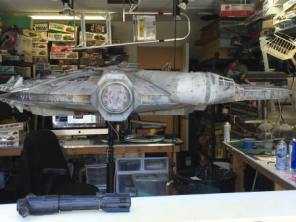 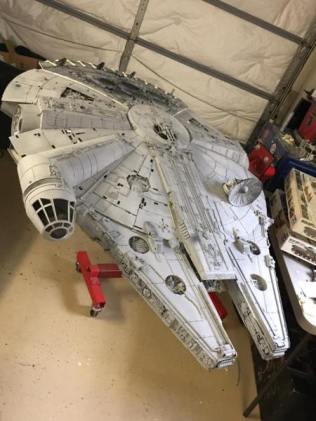 Lee was kind enough to give me an interview by email exchange.

What’s the background to you and Rogue Studio Productions and your incredible models?

I started RSP in 2012. I had just came off a long career in large company and I needed to find something new to do find a new path. I have done licensed work in the past and I wanted to keep going and building. I derived the name from the movie ‘Jaws’ there is a scene where they describe a shark that swims alone. I thought describe me very well.

You were the ones behind the fabulous 44″ Eagles from Space 1999 for Anderson Entertainment. I lusted after them for a long time, but as a Millennium Falcon focus collector, i had to stay strong, you know? How did you get involved with that project? Did you make the initial model “template”, or did you build the entire run?

I was searching for something to build and then sell it and make a copy for myself. I came across the print masters that a builder had made and I really thought they were accurate. At that point I had it all molded and casted and I built and Eagle. I took photos of that Eagle to San Diego Comic Con and Jamie Anderson saw them and wanted to know if I wanted a license. I didn’t hesitate and I said Yes!. We had to to tweak a few things for productions but everything was in house and built from the ground up and we hand built every one of them.

The last item I turned into MR was a studio scale X-wing and at the time they were becoming EFX. It was a rather smooth transition however I my X-wing was not selected as the paint master since I painted in such a way that it would be difficult to reproduce. It’s all part of the business.

What are you working on at the moment?

Moving the Falcon into the house and resting and spending time with the kids. I plan to ponder the next build as I chill out for a few weeks and finish up some commissions.

Were you nervous tackling something as well known and loved as the Han Solo’s iconic star ship? The modeling fraternity can be a pretty fickle bunch.

Actually no I just picked up and moved forward I had not time for nerves, sounds crazy I know. It can lock you up and prevent you from moving forward.

I see John Knoll and Lorne Peterson visited your stand at Celebrations. Were they able to give good feedback?

John did visit the booth I do not believe Lorne was at the show. He was very approachable and and mostly looked it over and we chatted briefly it was nice to have him stop by.

I saw that you started shaping the body for the Falcon as far back as 2013. How long were you planning and designing before you attempted to take her on? How long before you’ve identified all the pieces needed to build her. What sort of research did you do?

I started the basic hull in 2013 I got about 3 weeks into it and I had to start the Eagle license. I really just picked up and started at it no plans except for an overlay but that was it. I started collecting models while I was building Eagles. Once I completed the last Eagle I picked the Falcon back up. I gathered as I built since there was no need to wait until I got the last model part to start.

The research I did was to look at images that have been released showing the models on the shelves in the model shop at the time. I bought every model I saw on the shelves. Then I went through it all and I found a lot of parts that way. I had a list of parts from way back I’ve had for many years no idea where it came from but I also picked from that. One builder contacted me when I was almost half completed and he had compiled a few kit lists but I knew most of them already and some parts were yet to be identified however it was most appreciated and helpful as well.

The Falcon has a lot of kitbashed parts. With a vast majority of these kits long since out of production, i’d imagine that 3d printing has a massive impact for you on a project like this?

I only printed parts that required multiples of kits that were impossible to mine from. For example the shovels or flaps on the back that is from a kit from the 1960’s and you’re not going to find 26 of those and if you do your budget is going through the roof. So I had those molded and casted with one real part glued to the Falcon. They also did this on the original as well. I tried to use 3d printing as an enhancement and not a crutch. And pretty much every model kit part you see is a real model part (except for a few where the kit was impossible to locate). I used printing to print the cockpit interior and wind screen, radome, guns, escape pod rings. Now the parts were printed with no detail and I added the appropriate pieces. On the windscreen of cockpit I glued on the Tee trim around windows so I wanted to keep as much as I could original.

I see that you’ve tried to be as accurate as possible and i appreciate that must be extraordinarily difficult. Did you have to idealism any parts of the build?

I did not cut corners or try to guess at anything. I feel that would be a compromise and I did not compromise at all. I did have to get creative with the engine exhaust area though. I modeled best I could after the TFA exhaust since I found it more interesting than other incarnations.

I thought that building both rectenna dishes was a nice touch. How are they attached onto the model?

I have them mounted to an ABS cylinder and it is secured with rare earth magnets allowing dish to to turn as well.

I was always a little disappointed that the MR cockpit was a piece of back lit cardboard, so I’m particularly impressed by your build, as it looks like you’ve built every button, dial and panel from scratch. That must have been pretty tricky. Was that the toughest part of the build?

This one is best answered by my CAD artist Chris Arnold. I provided him all the reference I could find as well he provided some too. I asked him to recreate the life-size cockpit best he could. He did an amazing Job. I then had the cockpit painted by Steve Radler since he’s a good friend and a great miniature painter. I couldn’t do this and not include my friends in some way. 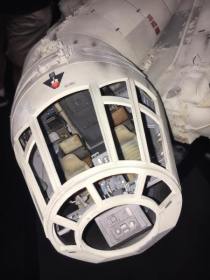 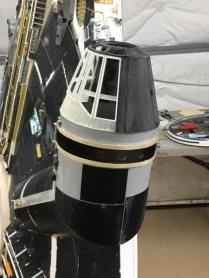 I see that the engines are illuminated. Did you also go for lighting on the cockpit and mandibles?

The model is ready for lighting in most of the appropriate places as well as lower permitter lighting for when in landing configuration. I’ll continue to complete all of that now that celebration is over.

Finally, what happens to the model when you’ve finished touring with her?

She will perch in my living room.

Check out the Rogue Studio Productions Facebook page, there are a lot of good photos of the build along with other models made by them, including some fabulous shots of his Eagles from Space 1999.

Below are more photos of the build taken directly from his Facebook page. 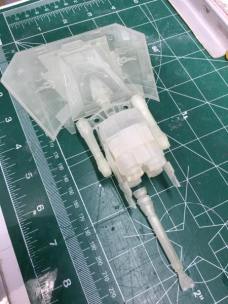 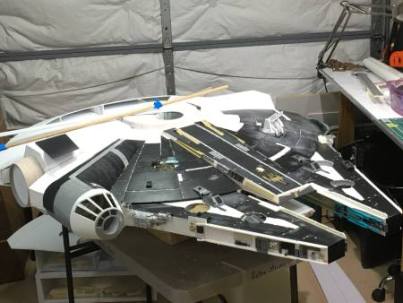 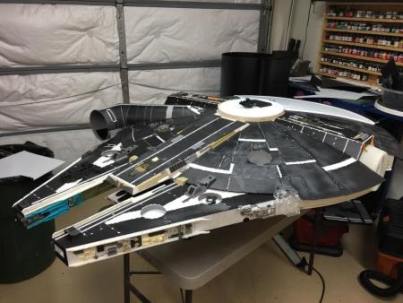 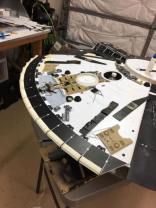 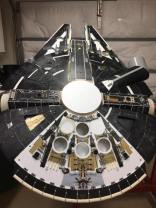 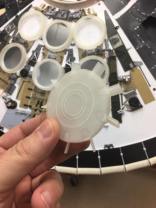 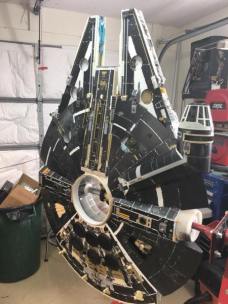 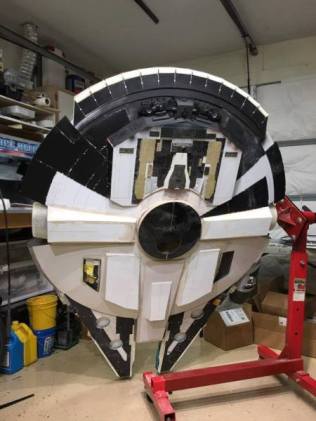 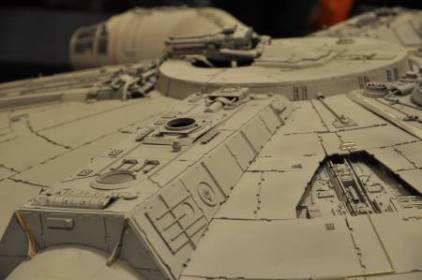 A keen Star Wars collector since 1977, my collection focus seems to have taken on a turn towards Han Solo's iconic Star Ship. Why the Millennium Falcon? No one else seemed to have one at the time and it was fair to say that i had difficulty resisting the higher end models. My friend, icruise from Rebelscum has a superb blog for his Jabba the Hutt collection, I thought that i'd start this blog to chart my own collection of Millennium Falcon related collectibles as it increases.
View all posts by mffanrodders →
This entry was posted in Fan Stuff, High End Collectables, Things that i don't have yet... and tagged Millenium Falcon, Millennium Falcon, Star Wars. Bookmark the permalink.