Fantasy Flight Games have announced a new “Heroes of the Resistance” expansion pack for their successful X-Wing miniatures game that features the Millennium Falcon and Poe Dameron’s Black X-Wing from Star Wars – The Force Awakens. 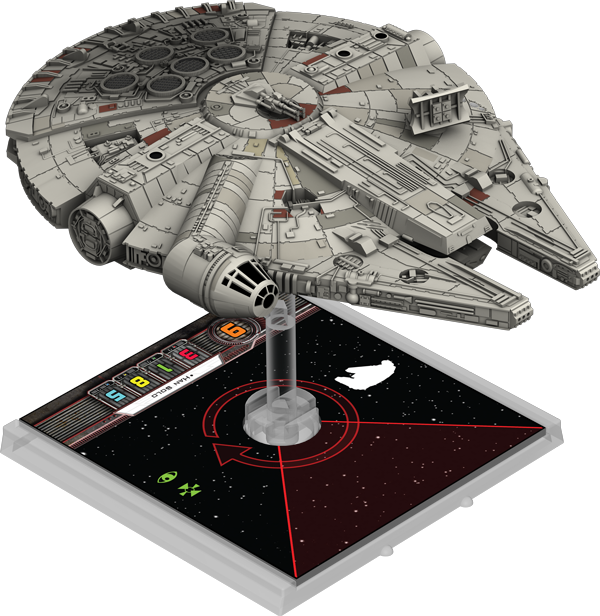 I have the OT Falcon, and they are very good quality, so i’m really pleased about this addition to the fleet. Perhaps they could release a Stellar Envoy to represent the PT?

Here’s what they say on their site;

First of all, you might notice the ship’s new, rectangular sensor array. While this is likely the first change you may notice in the difference between the sculpts, it is not the only one. Heroes of the Resistance introduces a new sculpt and paint scheme for the Falcon that faithfully represent all the changes that the ship underwent between Return of the Jedi and The Force Awakens.

Next, you might notice that the expansion’s new Millennium Falcon  Title upgrade features a different ability from the version in the Millennium Falcon Expansion Pack. While that version seemed to reflect Han Solo’s ability to fly the Falcon out of the most improbable of situations, the new version calls to mind Rey’s piloting in The Force Awakens, as she looped back on her opponents after flying out of the hull of a crashed Star Destroyer. And just as that maneuver allowed Finn to line up a shot, the new Title upgrade allows your Falcon to catch your opponents squarely in your firing arc more often than not.

And that is a good thing. For even as Heroes of the Resistance introduces new versions of both Han Solo and Chewbacca, it also marks the debut of Rey . The Falcon may come with a turret primary weapon, but Rey’s ability ensures that you get the most mileage from your Falcon when you can maneuver it skillfully. Whenever she attacks or defends against an enemy ship within her firing arc, she can reroll up to two blank dice. Accordingly, even as Heroes of the Resistance promotes the exploration of new tactics, it emphasizes the importance that the game places upon skillful maneuvering, reinforcing one of the game’s core joys.”

The set will also come with new cards with new artwork.

A long time Science Fiction fan and Star Wars collector, my collection focus has taken a turn towards Han Solo's iconic Star Ship and I thought that i'd start this blog to keep track of my collection of Millennium Falcon related stuff as i progress.
View all posts by mffanrodders →
This entry was posted in Toys and Games and tagged Millenium Falcon, Millennium Falcon, Star Wars. Bookmark the permalink.