I discovered this image by Nigel Sade yesterday afternoon called “Welcome Home” and it’s clearly an homage to the new Episode VII trailer. I’ll admit that it’s an unusual depiction of our favourite ship. Personally, I like the look of it and the stylised rebellion logo looks like it comes straight out of the pages of a Conan the Barbarian novel.

Nigel states that they started out as tattoo designs. Over time the requests became not for Tattoos but rather for proper wall art. So given this, I did pieces that were Fan Art related and some that were more Fine Art. so with the Fan art I wanted to give people something that gave a nod to their favorite fandom and at the same time felt more like fine art.

There are prints available and they are reasonably priced. Those in the US can also get copies printed on metal, which i’d bet looks very nice. There are a few other Star Wars images, each sharing the same style.

Darth Vader “It’s Too Late For Me” 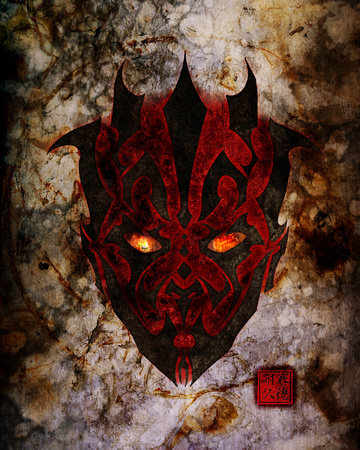 The Imperial Sigil “As The Emporor Has Forseen”

The Rebel Sigil “A Fools Or The Fool Who Follows Them”

Check out his gallery, as there are some really nice images there. I particularly like the Tardis, USS Enterprise and Superman work.

A long time Science Fiction fan and Star Wars collector, my collection focus has taken a turn towards Han Solo's iconic Star Ship and I thought that i'd start this blog to keep track of my collection of Millennium Falcon related stuff as i progress.
View all posts by mffanrodders →
This entry was posted in Art, Things that i don't have yet... and tagged Art, Boba Fett, Darth Maul, Darth Vader, Millenium Falcon, Millennium Falcon, Nigel Sade, Star Wars. Bookmark the permalink.