Never Tell Me The Odds by James Silvani

A couple of “Same, but Different” posts here with two examples of art of a similar theme. Namely the inside of the Millennium Falcon’s Cockpit. The first example (or should I say second, as already have a print of Eric Sweetman’s superb Muppetium Falcon?) Is this print by James Silvani called “Never Tell Me The Odds”. This one’s clearly set in the asteroid field of The Empire Strikes Back 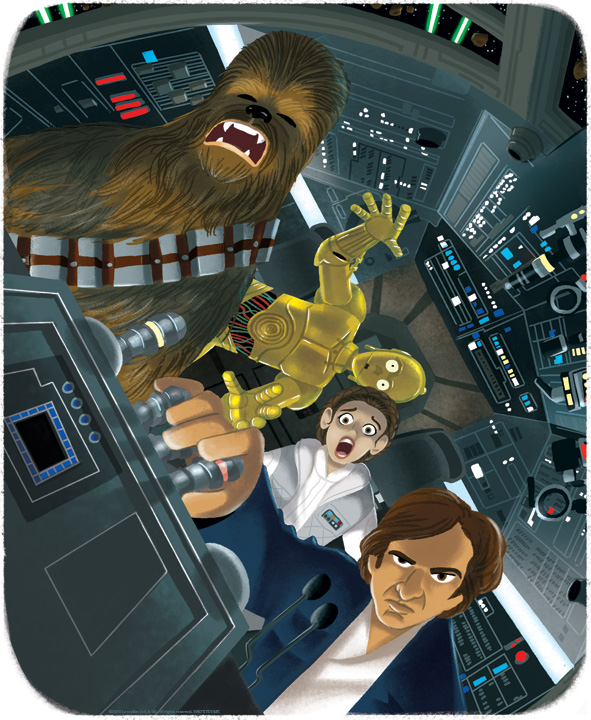 It’s available as a gliclee print from Acme Archives for $89. The print comes in at a fairly decent size at 13″ by 19″ and is limited to an edition run of 99 copies.

I haven’t picked one up yet but I do intend to. (I’m waiting for Louis Solis’ Kessel Run Qualifiers to be released, so I’ll probably pick one up then if it’s still available.)

A long time Science Fiction fan and Star Wars collector, my collection focus has taken a turn towards Han Solo's iconic Star Ship and I thought that i'd start this blog to keep track of my collection of Millennium Falcon related stuff as i progress.
View all posts by mffanrodders →
This entry was posted in Art and tagged Art, James Silvani, Millenium Falcon, Millennium Falcon, Star Wars. Bookmark the permalink.