When I first started my Millennium Falcon collection, one of the first things I bought was an awesome cutaway post of the Millennium Falcon (which i later found out was by technical illustrator; Christopher Cushman). Three years later, it still remains one of my favourite collectibles. 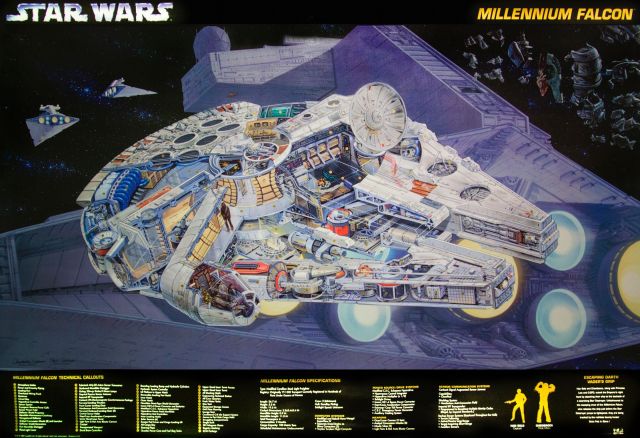 Christopher got in touch with me the other day and sent me a file of the original line drawing that is used in the Haynes Manual.

He said that he’d be open to answer any questions that I might have so I thought I’d do an interview for my blog.

“You’ll be the first interview I’ve ever carried out so please forgive me if my questions come across as ignorant or dumb.

Gosh no these are good questions.

Thanks. How long have you been a professional artist.

A professional artist since 1979 or 34 years, but I’ve always been artistically inclined.

What are you working on at the moment?

I have several projects that I have started  I’m a big Anime fan and I have finished a draft of Macross Zero. The Jupiter 2 from the motion picture of lost in space and My brother and I are looking at Battlestar Galactica, the most recent version.

The cut-away stuff is pretty niche, how did you get into doing them? Was it something you sought?

In my career I’ve been primarily an automotive illustrator and cutaways are quite common…  Its where I met David Kimble who did a cut away of the enterprise from the motion picture.  I love the cutaway because it fills in a fuller picture in a way that blue prints just can’t. You can see it all at once and see how each system supports the other.

As an artist, are there any areas that you feel you’d like to explore?

I’ve been working more in photography lately so there are always new things artists do to explore their creativity.  I also have a penchant for graphic design and love typography.

As well as the Millennium Falcon, you also do beautiful cutaway images of the USS Enterprise in all her incarnations. Are you a fan of the genre, or is it the technology that inspires you?

Yes I love all Sci-Fi, but it’s not just me by myself, my brother Mathew has been my partner in all of these efforts. He was responsible for the original TV series Enterprise while I worked on the Enterprise D and FDS and Voyager. We both worked on the Enterprise E which is the highlight of our work because we did the work in conjunction with the production of the movie.  Our poster premiered along with the movie First Contact!

Is you work digital or do you use more traditional methods in creating these works?

All of the line work on our posters was in pencil and used traditional illustration techniques… by the time the voyager and Enterprise E poster came out the colorist was using photographic sampling to color and detail some of the interiors.

You must have been given pretty extensive coverage of the Lucasfilm archive. How long would you typically research your chosen subject before committing brush to canvas?

Interesting question. I’ve been a fan since the movie came out and collected every book and photo I could find, so one could say given my technical interests I had been researching since 1977. When we got the work to do these illustrations was around the same time as Lucas’s reworking of the first three films and the posters were supposed to help pull it all together.  Lucky for me I am not a Star wars Purist. As an artist I am always trying to improve certain pieces of work and I could appreciate why Lucas was doing what he was doing. I also enjoyed a movie minus all the matte lines! 😉

I can imagine Lucasfilm to be pretty picky. How many revisions did you make to the Falcon before they agreed to release it? What sort of changes did you have to take before approval was given?

Knowing there were differences between all three falcons I centered on the Return of the Jedi version though many of the changes came with The Empire Strikes Back. I sent my illustration with written reasoning behind my choices, there was very little push back from Lucas Film… Ironically, push-back always comes back from fans and some of it boarders on the vicious. There was a young man from Australia who was convinced I had gotten it all wrong. After several difficult conversations I had to sever my conversation. The final word always comes from Lucas Licensing and they are more concise than people may think.

I read you blog entry and it seems like you had a lot of trouble getting credit for this. What happened? Do you feel that it was resolved?

Yeah, I had hoped that my blog could have been more positive and just about the work but because of some of our experiences it also serves as a cautionary tale. I’ve been in court and won my point on getting paid only to have the company I was working with go bankrupt. Very painful. With the Haynes folks we had to engage the fan base to apply pressure to get the credit we were do and the book is now properly credited.   These projects are very popular and they generate a lot of money. In the case of the Enterprise D,  nearly a million dollars.  People change when moneys come in.  I would say if one was inclined to do a project they believed in now that they need to borrow the money needed for licensing and printing so that they are the only one in the loop, no partners its sad but true.

Sorry to hear that. The million dollar question for me is how complicated was it to combine the three movie Falcons in to one?

Ultimately it went pretty smoothly. One must think of the Falcon as an ever evolving ship that Han and Chewie are always modifying.  In the first movie the falcon has 3 landing gear, by the second movie there are 5.  As the movies progressed it became less about exterior details and more about how to fit all the emerging sets into the existing exterior. Luckily it does all fit unlike many sci-fii ships which are never as big on the outside as they are on the inside.  The Tardis excluded LOL

The Tardis would be pretty cool, though. How do you rate other cutaways of the Falcon, such as the Attakus diorama or the ERTL model kit?

Again they all great! and they all suffer from various interpretations and while I feel my falcon is the most comprehensive from the tree movies i have to concede the Falcon may always be an interpretation.  One thing that almost all versions have wrong is the placement of the upper hatch that Lando uses to rescue Luke from the bottom of Bespin, It’s located port side and everyone has it on the starboard side, and Lucas agrees.

As an artist, have you or would you return to the Millennium Falcon?

Oh god yes. I’m looking forward to seeing the Falcon again in the next film now being made by Disney. I can’t wait to see what the fellas have modified now!

Of all the cutaway paintings that you’ve done, which one is your favorite and why?

It’s a toss-up for me. The Enterprise D was my first and most successful, the Falcon for the love of it, The ATAT Hoth poster for the sense of drama  and the Voyager poster because it is the most accurate work I have done.

Many thanks, Christopher. Best of luck future and let me know when the Galactica’s done. She’ll be beautiful.

MTFBWY (but I think you’d rather “live Long and prosper” 🙂

Some close up shots of Christopher’s Millennium Falcon. The attention to detail is incredible; 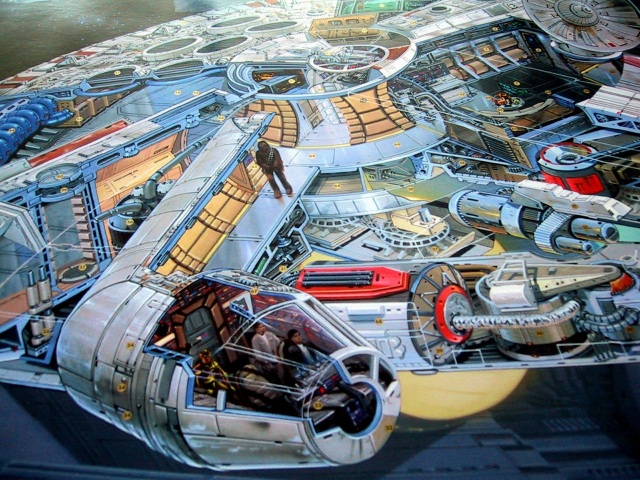 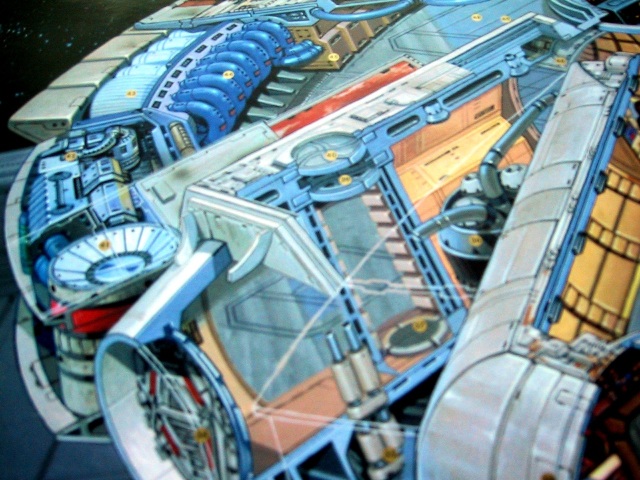 Here are some more examples of his work; 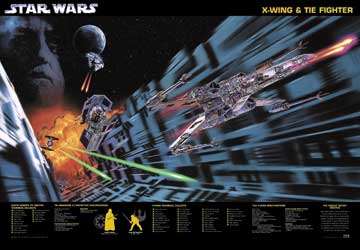 You can buy Christopher’s prints here. I can’t recommend them enough. Now then, i need to pick up a copy of that Death Star Trench Battles as I’ve just noticed the Falcon in the Background.

A long time Science Fiction fan and Star Wars collector, my collection focus has taken a turn towards Han Solo's iconic Star Ship and I thought that i'd start this blog to keep track of my collection of Millennium Falcon related stuff as i progress.
View all posts by mffanrodders →
This entry was posted in Art, Interview and tagged Art, Christopher Cushman, Millenium Falcon, Millennium Falcon, Slave 1, Star Destroyer, Star Wars. Bookmark the permalink.