There hasn’t been much in the way of new merchandise or hand made good for me to post about recently, so i thought that i’d post on a couple of art pieces that i’ve seen. 😦

Back in the early 80’s, before Zahn’s Heir to the Empire Trilogy created the Expanded Universe, the only real Star Wars books your could look forward to were “A Splinter In The Minds Eye”, the Lando Carissian Trilogy and the Han Solo Trilogy. These books (Han Solo at Stars End, Han Solo and the Lost Legacy and Han Solo’s Revenge) by Brian Daley told tales of Han’s earlier days in the Corporate Sector and were pretty good.

A couple of characters in the book were Blue Max (a splicer computer) and Bollux (BLX-5). Chris Trevas has created this image (i think it was for the essential guide to droids), of the four of them just outside the Falcon’s entrance ramp. 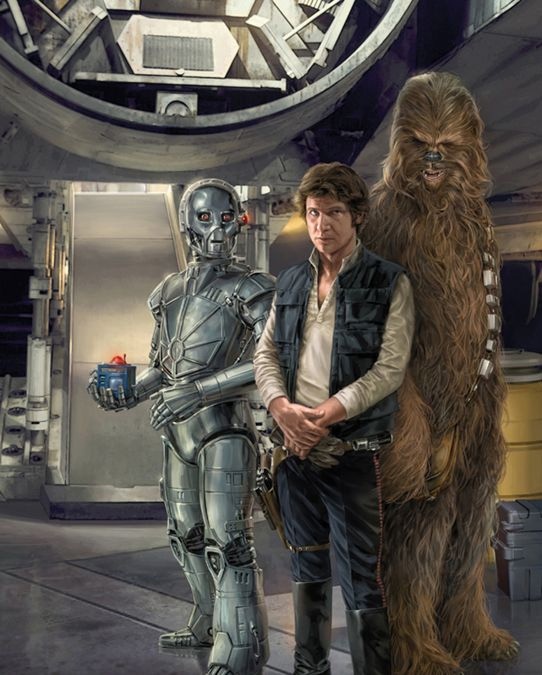 As with all of Chris’s work, the details are superb.

A long time Science Fiction fan and Star Wars collector, my collection focus has taken a turn towards Han Solo's iconic Star Ship and I thought that i'd start this blog to keep track of my collection of Millennium Falcon related stuff as i progress.
View all posts by mffanrodders →
This entry was posted in Art, Things that i don't have yet... and tagged Art, Blue Max, Bollux, Chewbacca, Chris Trevas, Han Solo, Millenium Falcon, Millennium Falcon, Star Wars. Bookmark the permalink.