I’ve seen these interesting little items come up on ebay this week. These “Patch Cards” were released by Topps in 2012 as part of their Galactic files set. They look kind of interesting and i gather that they’re pretty rare, but the prices are just too high at the moment. (I’ve seen them from $15 to 130.)

There are four patch cards that feature the Millennium Falcon. 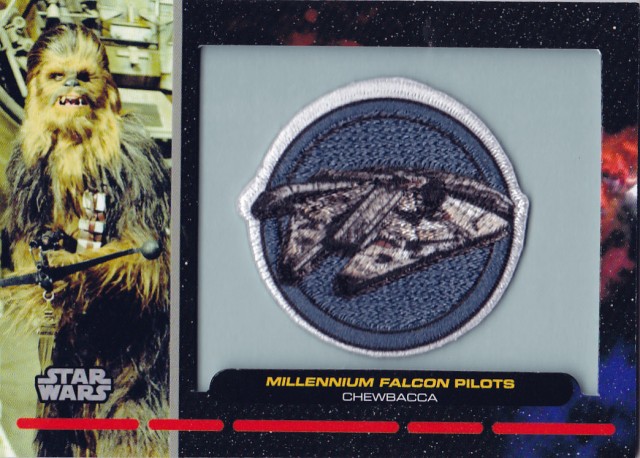 It’s a shame that they didn’t do different Falcon patches for different characters. Still, it’s a nice set and i’ll keep an eye on them to see if they go down in price.

A keen Star Wars collector since 1977, my collection focus seems to have taken on a turn towards Han Solo's iconic Star Ship. Why the Millennium Falcon? No one else seemed to have one at the time and it was fair to say that i had difficulty resisting the higher end models. My friend, icruise from Rebelscum has a superb blog for his Jabba the Hutt collection, I thought that i'd start this blog to chart my own collection of Millennium Falcon related collectibles as it increases.
View all posts by mffanrodders →
This entry was posted in Patches, Things that i don't have yet... and tagged Chewbacca, Han Solo, Lando Calrissian, Millenium Falcon, Millennium Falcon, Nien Nunb, Star Wars. Bookmark the permalink.