I’ve only known about ACME Archives for about 18 months now, but for some reason i missed out on the Han Solo Character Key. For what ever reason, i never saw it. (I don’t know if it’d sold out before i became a customer, or whether i just dismissed it out of hand due to the cartoony element of Han Solo.)

The Han Solo one featured the Ralph McQuarrie’s Docking Bay 94 picture “Sunk” into the background and rather typically, i find that i want one. A lot. 🙂 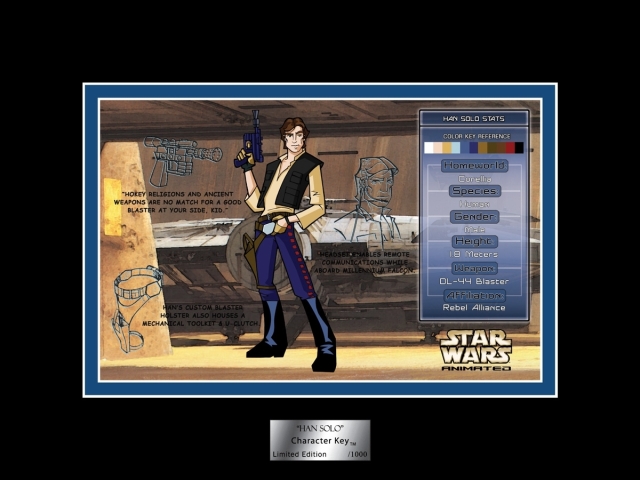 Limited to an edition size of 1000 pieces and retailing for $35, i imagine that these would sell out quickly. Oh well. Hopefully, ACME will decide on releasing a Sketchplate of the Millennium Falcon soon.

I wondered why they’re called character “keys”. ACME give this explaination. “An old-time traditional animator’s term, a “Key” is a thumbnail of a character or a background element with color reference.  Acme’s Character Keys are composed of a cel layer floated over a lithographic background.  The cel features a color rendition of the character while the background features sketches and color reference.   Each character key comes matted with a title tag and a certificate of authenticity.  Matted measurements are 8 inches by 6 inches.

A long time Science Fiction fan and Star Wars collector, my collection focus has taken a turn towards Han Solo's iconic Star Ship and I thought that i'd start this blog to keep track of my collection of Millennium Falcon related stuff as i progress.
View all posts by mffanrodders →
This entry was posted in ACME Archives, Art, Things that i don't have yet... and tagged ACME Archives, Art, Han Solo, Millenium Falcon, Millennium Falcon, Star Wars. Bookmark the permalink.