It’s made of Cardboard and judging from the text, there would appear to be figures to go with it too. I must admit that i’d like to find out what the dimensionsare and who the person/creature is on the top turret is.

It’s up for $125 which is pretty expensive in my opinion. I’m watching this and if it doesn’t sell, i might make a cheeky offer. Still, at the very least it’s a very new and very unusual item for the catalogue.

06/05/11: After doing a little research on the Internet, it would appear that these were given to large German toy stores to display the Kinder Star Wars Hippo toys and are quite rare. At 80cm’s its a pretty big size and i believe that there would be spaces for figures inside. Hmm, this actually appears to be quite a find.

Here’s a link to an article on Rebelscum on this dioramas and the associated figures. 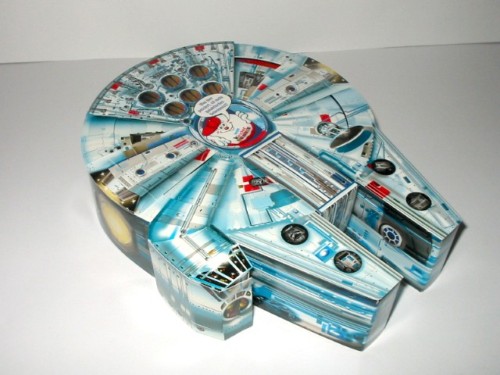 I git this in the post on Saturday. 80cms on the Rebelscum page was a bit oversized and its actually more in th region of about 22 cms. It’s in pretty good shape when you consider how old it is and what it’s made of.

I’m not too sure whether it’s worth the money i paid, but i have to say that i’m pleased with it. It also came with several of the figures. I’ll have to check to see if i got them all. 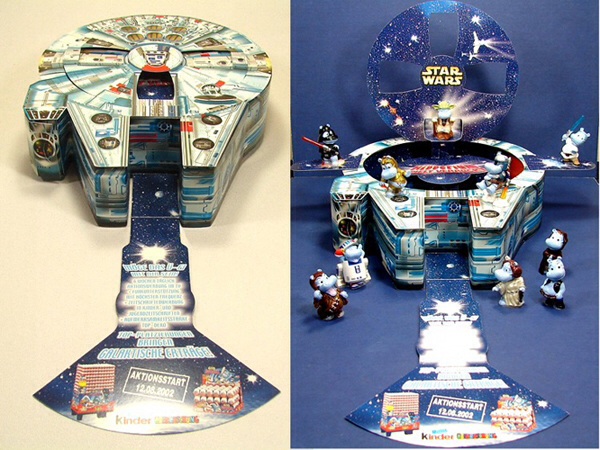 A long time Science Fiction fan and Star Wars collector, my collection focus has taken a turn towards Han Solo's iconic Star Ship and I thought that i'd start this blog to keep track of my collection of Millennium Falcon related stuff as i progress.
View all posts by mffanrodders →
This entry was posted in Toys and Games. Bookmark the permalink.