Back in the day Star Wars collecting was always limited to the books (which are a must have) and a few figures (when i could find them and if i was in the mood to buy them). Back in 2002, I was bored at work and i did a random search for “Millennium Falcon” on the internet browser and came across the Code 3 Millennium Falcon model. It was made of 5lbs of metal, could be displayed in either flight or landing mode and had removable parts so that you can see some inside details. (That’s what the blurb said.) I was obsessed and got a friend to order it for me. It was through this site that i found out about Rebelscum.com, Master Replicas and Attakus. and from here on, a massive gate just opened. I’ve been obsessed ever since.

Of course, once you’ve seen or have the pleasure to own the Master Replicas Version, it’s difficult to look at this piece in the same way. As my first high end collectable, i’m quite fond of it. I’ve read on the RS forums that these were actually just recasts of older plastic kits. Well, they were cool anyway. Code 3 also released several models since and i have them all. In my opinion, they were very underrated. They Also released some very nice 3d sculpted posters. (Code 3 are well known for their emergency services vehicles on www.code3.net.)

There were supposed to be 10, 000 of these according to their certificates. As much as i like these, i don’t think for one second that they sold out. I wonder how many they actually sold. 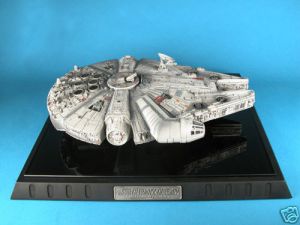 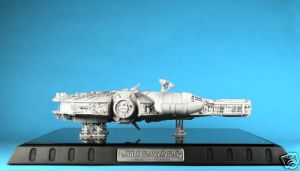 A keen Star Wars collector since 1977, my collection focus seems to have taken on a turn towards Han Solo's iconic Star Ship. Why the Millennium Falcon? No one else seemed to have one at the time and it was fair to say that i had difficulty resisting the higher end models. My friend, icruise from Rebelscum has a superb blog for his Jabba the Hutt collection, I thought that i'd start this blog to chart my own collection of Millennium Falcon related collectibles as it increases.
View all posts by mffanrodders →
This entry was posted in Code 3, High End Collectables. Bookmark the permalink.